THE TRAVEL LEAGUE OF VICTORIA (TLV)

The TLV has a long history dating back to its foundation in 1929 by a pioneering group of Travel Industry folk with its principal objectives as “the association of organisations or individuals actively engaged in the travel and tourism industry.” Its intentions included “promoting camaraderie between members and to arrange for talks and discussions on matters pertinent to its members and guests”.

Not too long after its inception, Vice-Regal patronage was arranged so that successive Victorian State Governors became our official patron, which was certainly a real boost to its status and position within the ranks of the Victorian Travel Industry. Thus, the Travel League of Victoria became more influential and was able to attract prominent members and speakers from both within and outside the industry.

The luncheon was always held on the 4th Wednesday of every month. The guest speakers were a varied and interesting mix, from the famous historian Geoffrey Blamey, AFL icon Ron Barrasi, Peter Hillary — Everest summiteer and son of Sir Edmund — and Tony Wheeler, the founder of Lonely Planet. The annual football lunch was always an attraction, with coaches and players often in attendance. 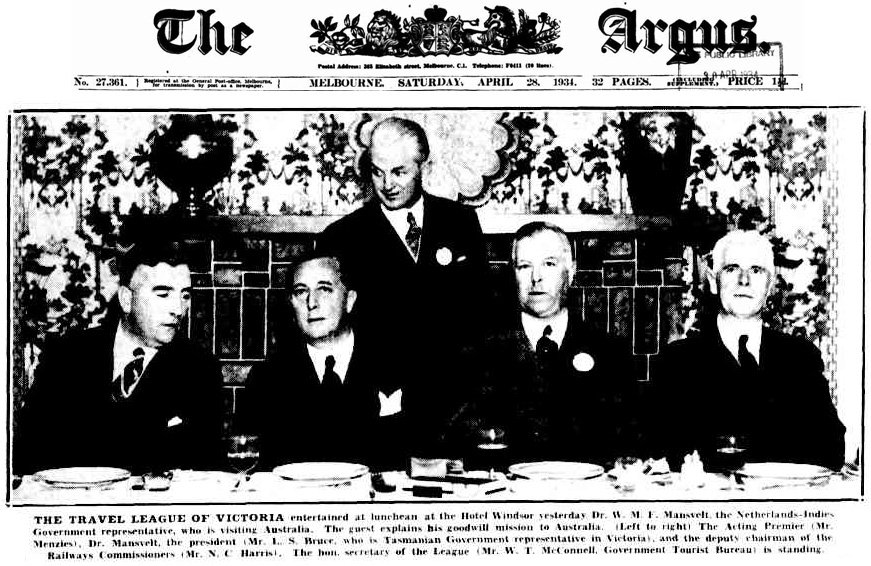 Above: an article from The Argus about The Travel League of Victoria in 1934

Vice-Regal patronage of course was contingent upon the approval of each Governor upon their assumption of office. This was naturally formally sought and was in all cases gracefully granted. Life members include Sir Henry Bolte, a former Victorian Premier.

With the Governor as Patron each lunch would start with a loyal toast, however this changed in in the 1990s and would then only happen when the Governor attended. Many of the older members thought this was controversial.

For many years the Australia Hotel was the home of the lunch, however this changed to meeting at various venues (some now a distant memory like the Southern Cross Hotel) including the Regent and the Grand Hyatt. Sometimes people would still turn up to the Australia Hotel by mistake. Lunches were scheduled from 12.30 to 2pm however many extended to nearby bars for further discussions.

Our current home since soon after it opened is now the palatial Crown Towers.

During the early 2000s the industry changed, and monthly luncheons became a thing of history. Travel League became less relevant and struggled to survive.

Without the efforts of Danny Wilson this institution would have disappeared many year ago. It did end as Travel League Victoria in 2009.

Barry Huxley, Matthew Fleming and Craig Hunt took on the task of rebuilding from the last “committee run” lunch where only 200 attended. Well down on the glory days of 1000! Now over 850 are regularly seen for the one event at Christmas each year. The event is famous (and notorious) Australia-wide, and is seen by many as a celebration of working in such a vibrant and ever-changing industry.

HAVE FUN AND ENJOY YOUR NETWORKING

YOU ARE KEEPING A GREAT TRADITION ALIVE!

MAY IT LONG CONTINUE!